This is a picture of me, on the lawn at the Parliament House of Australia, holding a sign which criticises the Australian government.  I am smiling because, despite the failings of the Australian government on asylum seeker issues, I still have the freedom to join with like-minded people on the lawn at Parliament House to protest, holding a sign like this. If I happened to have been born elsewhere, I might not have this freedom. 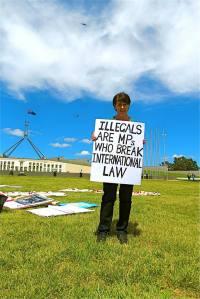 tician Malalai Joya, called for democratic reform and spoke out against the Afghan government’s tolerance for terrorism and violence.  She was expelled from the government and assassination attempts were made on her life.  Six attempts.

In West Papua, many people have been gaoled for engaging in political activities, such as organising demonstrations.  West Papuans who are pro-independence report that they are regarded by the Indonesian state and armed forces as the enemy.  Torture of men and rape of women, by the military, is common place.

In Pakistan, 15 year-old school girl, Malala Yousafzai, was hunted down and shot at point blank range by the Taliban for speaking out about her views on education for girls.  If you happen to be a Hazara woman living in Pakistan, you don’t have to speak out about anything at all to be a target for violence.  You just have to attend your local market or join a community social gathering.  Suicide bombers and car bombs are a regular occurrence in the systematic persecution of the Hazara people in the city of Quetta.

In Zimbabwe, supporters of the Movement for Democratic Change have been arrested and detained by the Mugabe regime.  Ambassador to Australia, Jacqueline Zwambila, has requested asylum in Australia, after the MDC lost its ministerial posts in elections last year.  She reports that she fears indefinite custody if she is returned to Zimbabwe, due to her MDC association and her recent criticism of President Mugabe.

In Iran, laws against criticising the Islamic regime, insulting Islam or publishing any materials which deviate from Islamic standards, are used to persecute religious minority groups, journalists and political dissidents.  According to Sharia law, blasphemers may be charged with ‘mofsed-e-filarz’ or ‘spreading corruption on earth’. The Revolutionary tribunal Dadgah-ha-e Enqelab tries anyone suspected of blaspheming, inciting violence or trying to overthrow the Iranian government.   Trials often result in prolonged detention, torture or execution.

And so it goes.   Belonging to a minority group, speaking out against the government, or holding a sign such as mine, could spark all sorts of acts of punishment or persecution if I happened to live in many countries of the world.  In order to escape that punishment and persecution, I would have to run for my life.  I have an education, a job and a home I own.  I would have to leave all that behind.  I have a mobile phone, which I would definitely bring with me.  It contains photos and emails which would confirm my political activism and my need for asylum.  I even have the odd piece of designer clothing, which I might wear if it was comfortable for travelling.  I do not currently hold a passport.  If I had to leave quickly, I would not have time to apply for one.   Nor would I want to draw myself to the attention of government officials.  I would most likely have to get on a boat in order to travel to a safe country which is well away from the punishment and persecution.

This would make me no different from the women who are being arbitrarily, indefinitely held in off-shore detention, for attempting to travel to Australia by boat in order to seek asylum;  detention which breaches the International Covenant on Civil and Political Rights.  They could be me.  Or your sister, your mother, your daughter, your wife, your friend.  And they could have your nieces and nephews, your siblings, your grandchildren or your children with them; locked up in tent camps in 45 degree heat, in unsatisfactory, unsanitary conditions with insufficient access to medical and welfare support (as has been reported recently after investigations by Amnesty International).

A few decades ago, approximately 43,000 Jewish refugees and Holocaust survivors settled in Australia.  They had been persecuted and punished because of their religion, their nationality or the action they took against Nazi rule.  They rebuilt their lives here and they contributed to business, industry, the professional sector and their local communities.  They became our doctors, our teachers, our scientists, our bakers, our factory workers, our shopkeepers, our neighbours and our friends.  Not surprisingly, they did not set out to recreate the Gestapo and the death camps from which they had fled.  Yet many Australians believe that today’s asylum seekers, who are fleeing the persecution and punishment of the Taliban and Sharia Law, will seek to recreate similar regimes here.  It is a belief which defies logic.  People who are seeking asylum are seeking to live in peace in a place where they have the freedom to be themselves and to express themselves.  Just like me.